After the Dillingham trial in June 1863 ended with Dillingham’s murderers going free, chaos gradually escalated on the roads. Armed robberies increased, and miners who had for months endured hard labor digging and breaking rock in the cold water of Alder Creek feared to risk the 1,500-mile journey home with their gold. Especially the first 80 miles between Virginia City and Bannack.

Some tried secrecy. “Bummer Dan,” a very successful and hard-working miner who was anything but a bum, hung his pokes of gold down his trousers by straps under his shirt and undershirt. He changed his travel plans several times, but at last he boarded the stage out of Virginia City bound for home. 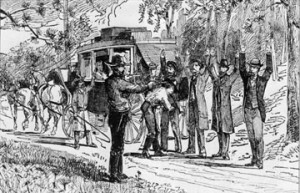 Stagecoach passengers being robbed at gunpoint.

Before the stagecoach reached Bannack, robbers struck. Guns drawn, they and their horses blanketed to cover everything that could identify them, they rode out of a draw and ordered the stage to stop. They forced the passengers to give them every ounce of gold they carried.

It sounds tame now, to state the facts in such bald terms. Imagine, though, the one-eyed glare of a revolver staring at you, or a double-barreled shotgun glowering, disguised men shouting curses never written in polite journals or spoken in polite society. Feel the terror.

Think of “Bummer Dan,” determined to keep his wealth — by some accounts nearly $2,500 at a time when a good wage for a skilled worker was $3.00 a day. They pointed their guns at him and demanded his gold. He handed over some of it, which he had put into pokes and carried in his pockets. He wasn’t stupid. He had known that robbery was likely, but he’d hoped the robbers would be satisfied with some of his gold and think it was all he had.

He was wrong. They insisted with loud threats and half-cocked revolvers and shotguns, until he had to undress and reveal the fat pokes of dust dangling on the harness. They cleaned him out. After all his hard work, he went from being a rich man to a poor one in a few minutes.

Another man gave his gold to his wife to carry. She hung the pokes ingeniously beneath her petticoats under her skirts. He reasoned correctly that the robbers would not hurt a woman, but he forgot about himself. When the robbers struck, they threatened to kill him if she did not hand over the gold. Shaking with fear and embarrassment, she managed to loosen the pokes and gave them to the robbers to save her husband.

The later the season, the more men hurried to leave before a Montana winter set in. Men who had not shaved, cut their hair, or changed their clothes in months, whose garments revealed more of their anatomy than they hid, visited the barber shop, the men’s bathing facility, and the clothing stores. They wanted to appear presentable for the trip home.

The robbers took note. Invariably the stagecoach was stopped and the passengers robbed. Boxes of treasure were stolen from the freight, no matter how cleverly they might be labeled. The conclusion was obvious: Somehow, the robbers knew who had gold to steal and which coaches carried treasure. 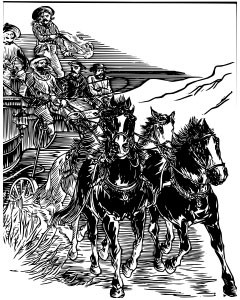 Throughout the late summer and fall of 1863 travel became even more dangerous. Men traveled in groups, and a few escaped only because they rode faster horses. The robbers even attacked wagon trains accompanied by armed guards. What follows is a partial list of the robberies during this time.

Besides these robberies and others, men who set off for home disappeared, and letters came to ask if anyone had seen their sons, fathers, husbands. Eventually, people estimated that 104 men had been murdered by the time men in Virginia City and Nevada City decided enough was enough.

Next month: The murder of Nicholas Tbalt