Very little information exists about how “Nick’s friends,” as the first posse called themselves, uncovered his murderer. His corpse was identified during the day Palmer brought him to Virginia City. About 10:00 p.m. that night they rode out of Nevada City. James Williams and some others rode down to his ranch on the Stinking Water to get mounts for everyone, because not every man owned a horse or tack. (Williams did not charge for the horses, either, although he was in the livery business at the time.)

Thomas Josiah Dimsdale in The Vigilantes of Montana* describes that ride in some detail, and it’s easy to imagine the fear of being discovered that rode with these men. Aside from themselves, they did not know whom they could trust. They were grocers (Thomas Baume), freighters (William Clark), ranchers (Elkanah Morse and James Williams) and miners. Some of them were veterans of the armies that fought for the Union (the United States), or the Confederacy. Others had fought for or against slavery in the savage guerrilla fighting known as “Bleeding Kansas.”

No matter their individual backgrounds, they were united in their purpose: to find Nick’s murderer. And they were very nervous. They detoured around Robert Dempsey’s stage station, and ranch where the rough element was known to associate, and went cross country. At a friend’s house, they warmed up, tended the horses’ and their own needs, and acquired a guide who lead them to the rendezvous on Wisconsin Creek. 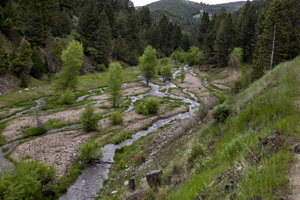 The creek was frozen over, but the ice was too thin to bear the weight of a horse and rider, so all went through the ice. They scrambled up the opposite bank and rode on, Dimsdale says, for about half a mile.

There they stopped and waited for first light. Williams ordered silence lest the sleepers at Long John Frank’s camp half a mile away hear them and wake up before the posse was ready.

Their wet clothes froze on them, and their feet went numb. The horses shuffled around, wanting to run and get warm, but the men held their noses to keep them in place and stop them from calling to each other.

A dog spotted them first, either because the wind changed or approaching daylight let them be seen. The dog barked. Immediately, Williams gave the order to ride. They clambered into their saddles and rode hell for leather to the camp. Men awoke, and Dimsdale describes mounds in the snow breaking apart as men sat up and rubbed sleep out of their eyes.**

They awoke to find long guns leveled at them. At once, Williams ordered them to stay where they were. When they had huddled into their blankets, he ordered the men in the wickiup to come out. 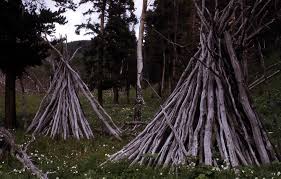 Wickiup, a brush shelter used by Indians of the Great Basin as lodgings.

When they did, he organized men to collect firearms and look for anything that might identify Nick as having been there. The searchers found nothing belonging to Nick, but they did find a pistol later identified as belonging to Leroy Southmayde and stolen in an earlier robbery, and $70,000 in greenbacks.

Dimsdale recounts that Williams*** and four other men walked Long John Frank about a quarter mile away to the place where William Palmer had found Nick. They questioned him until he came up with a plausible story. Denying all part in the murder itself, he named George Ives as the murderer.

*Nathaniel Pitt Langford, author of Vigilante Days and Ways (1890), relied heavily on Dimsdale’s account because he was not present when these events took place. (He had left the area in November to return to the East for the winter.)

**Snow insulates the ground. One foot (30 cm) of snow can prevent the ground from freezing, A beaver den covered with snow can be 60 degrees F inside.

*** Throughout his book, Dimsdale protects the identities of the Vigilante participants and the witnesses by referring to one or two as the “leader.” The leader of the posse that rode to find Nick’s murderers was james Williams. Later on in the book, when he refers to the Bannack vigilantes, he again refers to “the leader” of the Bannack contingent.