On March 7, I wrote that after Nicholas Tbalt’s body was found, a group of men signed an oath before they left Nevada City to question some men at the wickiup near where William Palmer found Nicholas Tbalt’s corpse.

Thomas Josiah Dimsdale put it this way in his book, The Vigilantes of Montana:

The same afternoon [that Nicholas Tbalt’s corpse was brought to Virginia City and identified] three or four of the citizens raised twenty-five men, and left Nevada (City) at 10 p.m. on December 18, 1863. The party subscribed an obligation before starting, binding them to mutual support, etc.

We don’t know the names of all of these men, loosely referred to as “Nick’s friends.” Among them were:

They arrived in Nevada City in the afternoon of December 19 with their prisoners, George Ives, Long John Frank, and George Hilderman. On December 20, both Nick’s friends (the prosecution) and Ives and his friends (the defense) organized for a trial. There were adherents on both sides to notify and lawyers to hire. Responsible citizens also arranged a “courtroom” of sorts made of two wagons and a log with a couple of benches completing the quadrangle. Because the trial was to be held outside, a supply of firewood was laid in to keep people warm when the temperatures went below freezing.

The trial brought to light enough information to convince Nick’s friends and others that a large-scale criminal conspiracy was at work in the region. Two groups of men, one in Nevada City and one in Virginia City, formed two separate vigilante organizations. The Nevada City vigilantes met in John Lott’s store late at night on December 23, 1863, before riding out in pursuit of Aleck Carter, named by George Ives from the scaffold as Nick’s murderer.

The Vigilante Oath
The Nevada City men who rode out after the trial swore allegiance to their purpose and to each other in a written oath. (The original document is held at the Montana Historical Society in Helena, Montana.) The oath reads as follows: 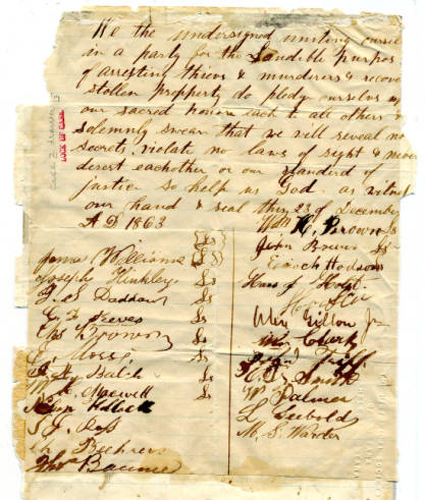 The original Vigilante oath. Used by permission of the Montana Historical Society, SC953

We the undersigned uniting ourselves in a party for the laudible purpos of arresting thieves & murderers & recovering stollen propperty do pledge ourselves and our sacred honor each to all others & solemly swear that we will reveal no secrets, violate no laws of right and not desert each other or our standards of justice, so help me God, as witness our hand and seals this 23rd day of December A. D. 1863.

(The oath, according to A. J. Noyes, editor of the fourth edition of Dimsdale’s Vigilantes of Montana attributes the oath’s composition to John Lott, who became the Vigilante treasurer, but he did not sign it. I have left in the misspellings because the author of the oath probably did not consider that editorial perfection was necessary to catching murderers.)

These men, together with others from Nevada City and from Virginia City formed the core of the Vigilantes of Montana.

Next month: A Change of Venue