Originally, I intended to post this article about the middle of July. it is now closing in on the middle of September. What happened? For one thing, I got lost in applying to appear at the Montana Book Festival. It was a successful attempt, and I’ll be presenting on Saturday, September 12, but intense with a short deadline. Then, I decided to put some finishing touches on this post. In the middle of that, I went for a walk and tripped over a slightly raised piece of the sidewalk. I put my best face forward, but the sidewalk won. (Do NOT try this at home.) I wound up with the world’s greatest shiner, which has almost vanished after more than a month. I also broke a bone in my right hand, which has made typing difficult, and painful. And really, really slow.

But I’m back in the saddle now, and God willing, there will be no more trips!

The George Ives Trial: A Change of Venue
Having captured George Ives after his attempted escape, the posse of Nick’s friends arrested George Hilderman at Robert Dempsey’s ranch where Ramshorn Creek flows into the Ruby River (then called the Stinking Water).

They brought the suspects — George Ives, Long John Frank, and George Hilderman — to Nevada City on December 18, after the sun had dropped behind the mountains. There the procession stopped. A disagreement broke out between those who wanted Ives tried in Virginia City and those who wanted him tried in Nevada City. Most of the posse did not want to take them to Virginia where Henry Plummer was sheriff. Having been elected the sheriff in Bannack, also, he had appointed a deputy, Jack Gallagher, to be his surrogate in the larger town.

By mining district rules, crimes and disputes were tried in a miners meeting, before the judge or president of the district. Either a jury of the whole or a formal jury of picked jurors would hear the evidence, and one of the sheriff’s duties was to select the jury. Nick’s friends feared that if the trial were held in Virginia City, Sheriff Plummer would select a jury friendly to Ives, who would be acquitted.

A good friend of Ives named Johnny Gibbons apparently spearheaded the argument to take Ives and the others to Virginia for the trial. Dimsdale writes, “At that time he was a part owner of the Cottonwood Ranch (Dempsey’s), and kept the band well-informed of all persons who passed with large sums of money.”

The question, writes Dimsdale, was “whether they should bring Ives to Virginia, or detain him for the night at Nevada. Phrasing the dispute as an argument between “conservatives” and “radicals,” he records that the radicals won. 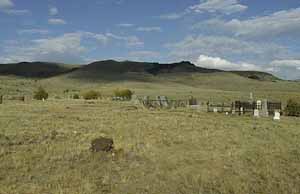 At this point, the story becomes very controversial for modern history buffs and historians alike. Both Dimsdale and Wilbur Sanders write that Gibbons’ vote was rejected on the grounds that he did not have the “suffrage” (Dimsdale) or the “franchise” as Sanders put it. In plain English, Johnny gibbons was not allowed to vote on whether his friend should be taken to Virginia city or not because he was at least part African-American. Prior to the ratification of the Fifteenth Amendment to the Constitution on February 3, 1870, people of color were not allowed to vote.

Seven years before, when the vote was taken that would determine where George Ives would be tried, perhaps the most determined voice in favor of taking Ives to Virginia City could not vote on the issue.

In December 1863 the growing population spreading out up and down Alder Gulch led to the nickname, “the fourteen-mile city,” but only three districts had formally organized. First, the Fairweather District elected officers in June 1863. Nevada District organized second, and Junction, downstream from Nevada, elected officers not long before Ives’s arrest.

Because the organization of Junction was so new, the officers yielded jurisdiction to Nevada.

Next month: Organizing for a Murder Trial