The trial of George Ives for the murder of Nicholas Tiebolt (also spelled in contemporary sources Tbolt, Tbalt) began late in the afternoon of December 19, 1863. 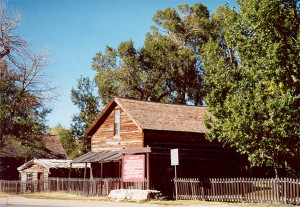 The trial of George Ives took place where the two signs stand. John Xavier Beidler sat astride the ridge pole on the little building at left.

Of all the books written about the Vigilantes, the most intriguing view of the trial and the only one written from a legal perspective, is Montana Vigilantes, 1863 – 1870: Gold, Guns, & Gallows, by Justice Mark C. Dillon, Associate Justice of the Supreme Court of the State of New York, Appellate Division.

Justice Dillon writes, “Unlike trials today where judges are unquestionably in charge of determining matters of law and procedure, there was much public debate over whether Ives’s verdict should be by a unanimous jury of six or twelve persons subject to the ‘reasonable doubt’ standard or by the public acting as a jury en masse.” (p. 97) Wilbur Fisk Sanders (prosecutor) suggested the compromise that resulted in two advisory juries of twelve men each from Junction and Nevada mining districts, with the rest of the crowd served as the “jury of the whole.”

When ruffians rule & murder is tolerated, what can honest people do but fight back?

The prosecution led off with William Palmer’s testimony about finding the body. Despite tough cross-examination, Palmer remained steadfast in recounting the careless reaction of Long John Franck when he asked for help in loading the corpse into his wagon.

Next came Long John himself, who had agreed to turn state’s evidence in return for not being charged with the murder, and to accept a sentence of banishment. (After he testified, he left the region, never to be heard from again.)

Franck testified that when Tiebalt paid for the mules pastured at Ives’s ranch, the accused saw that he had a well-filled poke and a span of good mules. “Why should he have all that when I don’t?” Ives said. Franck testified that they drew straws for the job of going after Tiebalt. Ives won. He jumped on his horse and rode after young Nick. When he came back with the mules and the gold dust in its poke, he said, according to Franck, “It didn’t seem like fair play to shoot him in the back.” He shouted at Tiebalt, who turned in his saddle. Seeing his end was upon him, he asked for time to pray. Ives told him to get down off his horse, and as he knelt to pray in the dusty road, Ives shot him between the eyes.

Justice Dillon describes the cross-examination of Franck as “brutal.” The defense accused the witness of “peaching on his pals” in order to save his own skin. (p. 95) A common staple of law courts and legal fiction now, turning state’s evidence against former associates was a mark of cowardice then.

The defense also accused Franck of being the real murderer who was lying about Ives in order to save his own skin.

Somewhere during the trial’s progress, people began to talk to each other. They compared notes on intimidation, threats, and other encounters with Ives and his associates. when they brought their stories to the prosecutors, the trial wandered from its immediate purpose — to try Ives for the murder of Tiebalt. It expanded into trying him as a road agent generally.

Throughout the rest of December 19 and 20, and into the 21st, witness after witness took the “stand,” one of two Schuttler wagons used as judge’s bench and witness stand, and described their encounters with Ives. Several of Ives’s associates were also implicated and were soon seen leaving Nevada City. Among them was Aleck Carter.

One accusation of robbery depended on a piece of physical evidence, a revolver found at Long John Franck’s wickiup when the posse of Nick’s friends first sought to question him. Leroy Southmayde, the gun’s owner, later identified it by the serial number, and it became part of the evidence against Ives.

Anton Holter was one of Ives’s victims who had the courage to testify against Ives. He recounted how Ives had demanded money from him, and when he proved that he had none, Ives shot at his head, parting his hair. To save himself from the second attempt on his life, Holter dove into a ditch. Fortunately, Ives did not try a third time. The defense attorneys interrupted several times to object on the grounds that Holter’s account and those of other victim were inadmissible because they did not go to prove that Ives had murdered Nicholas Tbalt.

“As a general rule today, evidence of unrelated, collateral crimes is not admissible in evidence against a defendant at a criminal proceeding, on the ground that the commission of other crimes or bad acts does not mean that the defendant committed the offense for which he is presently charged. In other words, even if Ives was involved in various alleged trail robberies, evidence of these robberies does not mean, in and of itself, that Ives committed the robbery and murder of Nicholas Tiebolt. The prejudice caused to a defendant by evidence of collateral matters is believed to often outweigh the probative value of that evidence.

He points out, however, that exceptions to the general rule of hearsay do exist, and that “prior crimes and bad acts are sometimes admissible… If the earlier conduct speaks to the defendant’s lack of honesty or willingness to place his own interests above those of others.”

Rulings over the admissibility or inadmissibility of a defendant’s prior crimes and other bad acts at trial are therefore complicated and require a balancing of competing factors by the trial judge. Such rulings were rendered more complicated for judges of the western frontier, who were often without formal training in the law and equipped with no law books in the back hills of rural Montana in 1863.

Both those conditions applied to the Ives trial. Dr. Don Byam was a physician, and Judge Wilson’s qualification to be a judge apparently stems from his election to that post in the newly formed Junction mining district.

Nor did the lawyers themselves have law books. Those heavy tomes were not high on anyone’s priority list when a household’s entire belongings had to be packed into one wagon about the size of a smaller SUV.

Because the trial transcript was lost, we have no written record of what the witnesses said, except for eyewitness accounts written sometimes years after the event. Late in the afternoon of Dec. 20, the prosecution rested its case. It was now the defense’s turn.

2 thoughts on “Guilty or Innocent?”