After the Ives trial ended on December 21, 1863, two groups of men organized themselves for the purpose of ending the rule of terror in Madison and Beaverhead counties – and beyond.
One group, 25 men in Nevada City, organized themselves as a posse to ride after Alex Carter two nights after George Ives was hanged.

The other group organized themselves in Virginia City. Each acted without the other group’s knowledge – at first.

This is Part I of the story of how these men formed one organized group that became known to history as the Vigilantes of Montana will be told in three parts.

Today’s article tells who they were; it will name names and offer evidence for you to puzzle over one remaining question: How deep was the involvement of the Masons? I’d be very interested to know what you think.

On November 9, I’ll discuss the Vigilante organization – complete with by-laws and officers. If you have information about who wrote the by-laws, by all means share it with all of us.

On December 12, I’ll get into some of the Constitutional issues that raised controversy at the time the Vigilantes were active — and even now.

(When I capitalize Vigilante or Vigilantes, I mean the organized Montana Vigilance Committee or individual members rather than unorganized groups or individuals that subscribe to vigilantism where organized law enforcement is present.)

There is an old Montana saying: “Not all Vigilantes were Masons, but all Masons were Vigilantes.” (Again, my capital V on Vigilantes.)

As Wilbur F. Sanders wrote in his account, “…while there were a number of masons in the country, there was not, and never had been an organized masonic lodge….” (Montana Historical Society Archives, MC 53, p. 5).

Sanders himself was a Mason. A Republican and an abolitionist, he was also one of two prosecutors in the George Ives trial. The other was Charles S. Bagg, a Democrat. Although the two men remained fast friends all their lives, I have not yet discovered whether or not Bagg was a Vigilante, although I think it likely that he was.

At first, not even the Masons knew who were the other Masons. Then on Nov. 2, 1862, William H. Bell died of natural causes in Bannack, in the Grasshopper diggings. As he lay dying, Mr. Bell requested a Masonic funeral. Someone put signs on posts and trees asking all Masons to gather and grant Brother Bell’s dying request. According to reports, some 70 or so Masons answered the call.

At this time of deep division in the country, during the Civil War, the Masons became a unifying force in the region. Being a Mason crossed religious lines: Wilbur Sanders was a Protestant, and Solomon Content (who built Content’s Corner) was Jewish.

Masons also came together over issues of law and order that crossed political boundaries. Wilbur Sanders believed in equality for black people – now. Not at some future date. At a time when slavery still held sway in much of the United States and in some of its territories, this was a radical idea.

Another Mason, Paris Swayze Pfouts, was an adamant Confederate sympathizer who sneered in his autobiography at the “negro equality school.” (Written in 1868, the autobiography is titled, Four Firsts for a Modest Hero, and was published in 1968.)

But the two men agreed about the necessity for law and order.

Sanders writes: “On two occasions in November 1863, I with Paris S. Pfouts, a merchant in Virginia City from St. Joseph, Missouri, having satisfied each other of our Masonic affiliations, had walked (up) Wallace Street (into) untrodden sagebrush, and consulted and planned and speculated with reference to the formation of a Vigilance Committee and the probable support and opposition it would receive.”

They worked together to bring the law and law enforcement to a chaotic area where gold, greed, and a vacuum of law led to ruffians’ rule and a tolerance for murder. Pfouts was elected president at one of the first organizational meetings, perhaps because he was absent. Sanders served as the Vigilantes’ legal counsel.

What do you think about the Masons’ involvement?

Here, then, are the names of some of the original Vigilantes I have verified in at least two sources. The obligation reads:

“We the undersigned uniting ourselves in a party for the laudible purpos of arresting thieves and murderers and recovering stollen propperty do pledge ourselves and our sacred honor each to all others. We solemnly swear that we will reveal no secrets, violate no laws of right and never desert each other or our standerd of justice. So help us God, as witnessed by our hand and seal this 23 of December AD 1863.” 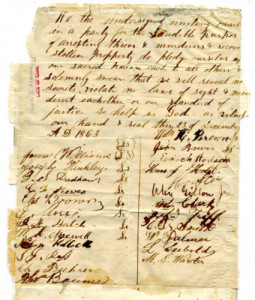 The original Vigilante oath. Used by permission of the Montana Historical Society, SC953

Some of these men had ridden with the original posse to confront Long John Frank at Wisconsin Creek about Nick Tbalt’s death. As Frank was distinctly unhelpful to William Palmer, they no doubt figured that was a good place to start. Hoffman Birney lists them as: “Charles Beehrer (German brewer), Elkanah “Elk” Morse, Joseph Daddow, Thomas Baume, Henry Clark, George Burtchy (Bertsche), John Wilson, Frank Angevine, Elias Story. (Elias Story was Nelson Elias Story, who later drove the first cattle herd from Texas to Montana and is credited by some as having begun Montana’s cattle industry.)

These, are some of the men who became Vigilantes. They did not boast of belonging to the group, because at first to be known as a Vigilante endangered their lives and the lives of their associates. And even at the time, despite the calm and relatively orderly society that prevailed after March 1864, many good people bitterly opposed their actions as being nothing short of murder.

The legality of their actions is if anything more controversial 152 years later.
We’ll look at this issue in a subsequent article, in January 2017.

Next: The Vigilantes Organize